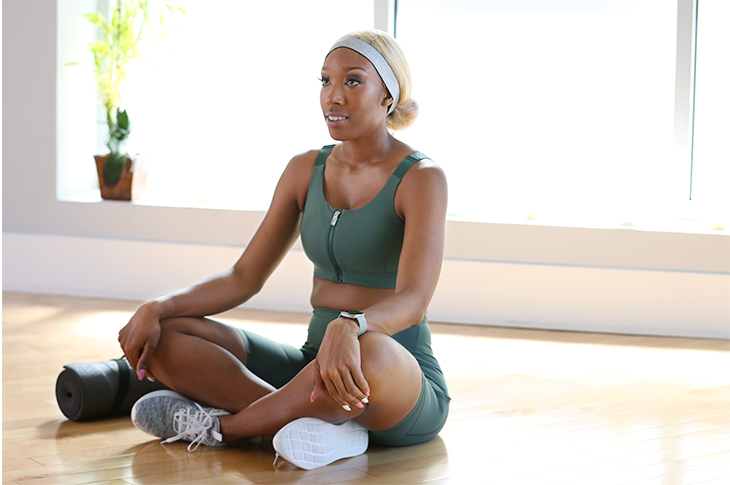 Today, she’s a popular health and fitness content creator. But as a teenager, she struggled with maintaining a positive body image. Discover more about Shaunise Price’s journey—and how she now uses her Fitbit to help manage her healthy lifestyle.
The post Find Out How Content Creator Shaunise Price Uses Her Fitbit to Manage a Busy Life appeared first on Fitbit Blog.

By any measure, Shaunise Price’s life is busy. In addition to being a single mother of two elementary school-aged children, she works full-time and is finishing a bachelor’s degree in accounting. On top of all that, she’s a popular health and fitness influencer on Instagram. With all the demands in her day, she admits it would be easy to neglect the fundamentals like eating well and exercising.

“The truth is that I can’t let my health slip,” Shaunise says. “If I don’t prioritize diet and fitness, I’d never be able to keep up with everything I have to accomplish.” But like everyone, she admits, she needs a little extra motivation some days. That’s when she relies on her Fitbit Sense, which she calls “my life coach on my wrist.”

When Shaunise first got a Fitbit Versa in 2018, she mostly used it to get her 10,000 steps each day, a goal she liked to share with her mother and some friends. When she bought her Fitbit Sense in 2021, she began to rely on the features that gave her little nudges and encouragement. It wasn’t long before she started using the guided coaching programs and video workouts to begin her day. She looked to the health metrics to chart her improvements over time. There are few Fitbit Premium features she hasn’t tried at least once.

“I track my menstrual cycles and stress levels, and I log my water intake and what I ate during the day,” she says. “I’ve become a Fitbit evangelist around my friends, family, and coworkers. I’m always talking to people about my Fitbit and love the challenges I get to do with others where we can compete in a friendly way and keep ourselves accountable.”

Shaunise has always been active and athletic, but her Fitbit has given her new ways to achieve a healthy lifestyle. “With my Fitbit, I’ve tried some new activities,” she says. “I’ve even tried some mindfulness and meditation. I never realized how hard it was for me to sit silently, relax, and take deep breaths. I’ve also learned things about myself that I didn’t know. In particular, I now understand how important sleep is to my physical and mental health.”

Shaunise’s healthy journey hasn’t always been smooth or easy. As a teenager, she struggled with healthy eating and maintaining a positive body image.

“I was a skinny kid, and for a while, I was restricting what I ate to the point that it was unhealthy,” she recalls. “I was probably borderline anorexic. Then I learned about bulimia on television, and I started that behavior. I hid that illness from my friends and family, but weirdly, I thought it was normal for a long time. It was like a kind of addiction.”

One day Shaunise looked at herself in the mirror and saw herself clearly. She realized she was looking at a body that wasn’t getting enough nutrients and a young woman who so lacked energy that she sometimes nearly fainted. “I was frail and weak, and I didn’t like how my clothes hung on my body,” she remembers. “That’s when I began what I call my ‘self-love, self-care journey.’”

Logging what she eats into the Fitbit app helps remind Shaunise to get the nutrients and calories her body needs to function at a high level. She also uses Fitbit recipes to create balanced meals with healthy levels of macro and micronutrients.

Shaunise has shared her journey to health through Instagram. She doesn’t try to present an idealized, perfect self. She believes it’s essential to be honest about her struggles and successes. “I was tired of hiding things,” she says, “I wanted to connect with the men and women who were also struggling to try to live healthier lives.”

“I want my kids to know that exercise and nutritious eating isn’t a burden—it can be fun and joyful,” she says. “When I’m feeling my best, I’m the type of person that laughs easily, smiles at everyone, and strikes up a conversation with the person next to me in the checkout line. That’s the person I want them to see. Staying healthy is not just about your body; it’s about your ability to stay upbeat, embrace life, and show love to the world.”

The post Find Out How Content Creator Shaunise Price Uses Her Fitbit to Manage a Busy Life appeared first on Fitbit Blog.